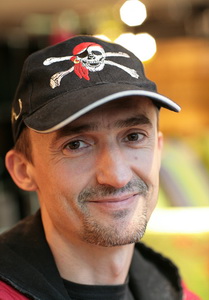 Has exhibited in more than 50 group and solo shows in Russia, Europe and the USA. In 1991 he moved to New York after being awarded a Pollack-Krasner Foundation Grant as an Artist in Residence; he was awarded First Prize at the Brandywine Workshop in Philadelphia in 1996, and in 1997 became a member of the Society of Illustrators and the Print Club of New York. His poetic landscapes, with their Surrealist overtones, play on the contrast between tiny figures (often animals) and the immensity of Nature (especially clouds). His works can be found in Russia at the Pushkin Museum, Moscow and in Nizhny Novgorod Art Museum; and, in the U.S.A., in the New York Public Library; the Fogg Museum of Art at Harvard University; the Portland Museum of Art, Oregon; the Duke University Museum of Art, Durham (NC); the Jane Voorhees Zimmerli Art Museum, New Brunswick; and the Russian Club at the United Nations in New York.