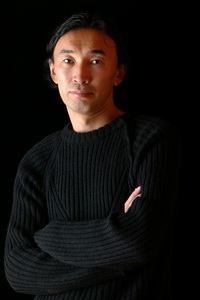 Dashi Namdakov, a Buryat sculptor and a graphic artist, lives in the South Eastern part of Russian Siberia near the absolutely magnificent Lake Baikal, the world’s cleanest and biggest fresh water container - one of the World’s Natural Heritage Sites. The local people – Buryats – believe the Lake to be sacred.

Dashi was born in 1967 in a small Buryati village near the Russian – Chinese border. His father was a well-known craftsman in the village who was famous for his versatile abilities to make things with his own hands – furniture, metal handles and even carpets. His wood-carved sculptures of Buddhist gods and tangkas (Buddhist icons) were installed in monasteries. So, from early childhood the kids learnt different skills through helping their father.

This is the atmosphere Dashi has grown up in and by the time he became a young man he had a good command of various manual skills. But at the age of 15 Dashi suddenly got very sick and for 7 long years no doctor could heal him. The boy was near the death’s door.

Finally the parents found themselves at a shaman who found the cause of the sickness. It was the negligence that people show to their roots, their predecessors and their names. She made her ritual. Incredible enough but the pain stopped instantly. And 7 days later Dashi was in another city looking for a job. That shaman predicted that Dashi would see a huge success due to his ability to observe the beauty of the surrounding world and to recreate it in metal.

He moves to Ulan-Ude, Buryati central city and starts his carrier in the workshop of the locally well-known sculptor G.Vasilyev. In 1988 Dashi is admitted to the University of Fine Arts in Siberian Krasnoyarsk city. This is where Russian famous artists Lev Golovnitsky, Yuri Ishkhanov, Azat Boyarlin and Eduard Pakhomov taught him the academic art.

After graduation in 1992 Dashi returns to Ulan-Ude. In the year 2000 after his first personal exhibition in Irkutsk it becomes clear that a new star was born in the world of arts. The exhibition came as a furore to the art establishment. The first exhibition was followed by other successful venues in Russia and other countries.

The mysterious images often haunt Dashi during nights when the consciousness is in transition to another world inhabited by celestial creatures and spirits. Dashi scrupulously renders these visions to the paper – for him not to forget - and then the night dreams are imprinted in bronze or silver.

Dashi’s sculptures belong to other, remote worlds where the man and the cosmos are one, where every single thing is an integral part of the universal construction – each having its own individual place – and yet constantly reincarnating. This is the oriental idea of the world – seeing beauty in the fragile harmony of things and fearing to break this beauty with an awkward move.

This is why old shamans talk to the spirits and heal people in Dashi’s world. His old warrior does not look barbaric at all – rather he is tired and wise. However one feels that his wisdom does come from a lot of pain. Knowing the real cost of the victory the warrior becomes wise and thus more humane than any body else. Dashi’s women are sensual but shy in the oriental manner. Looking at a wild fallow deer how can anyone fail to see a beautiful girl? If one takes a close look at the world around he must be able to see its beauty.